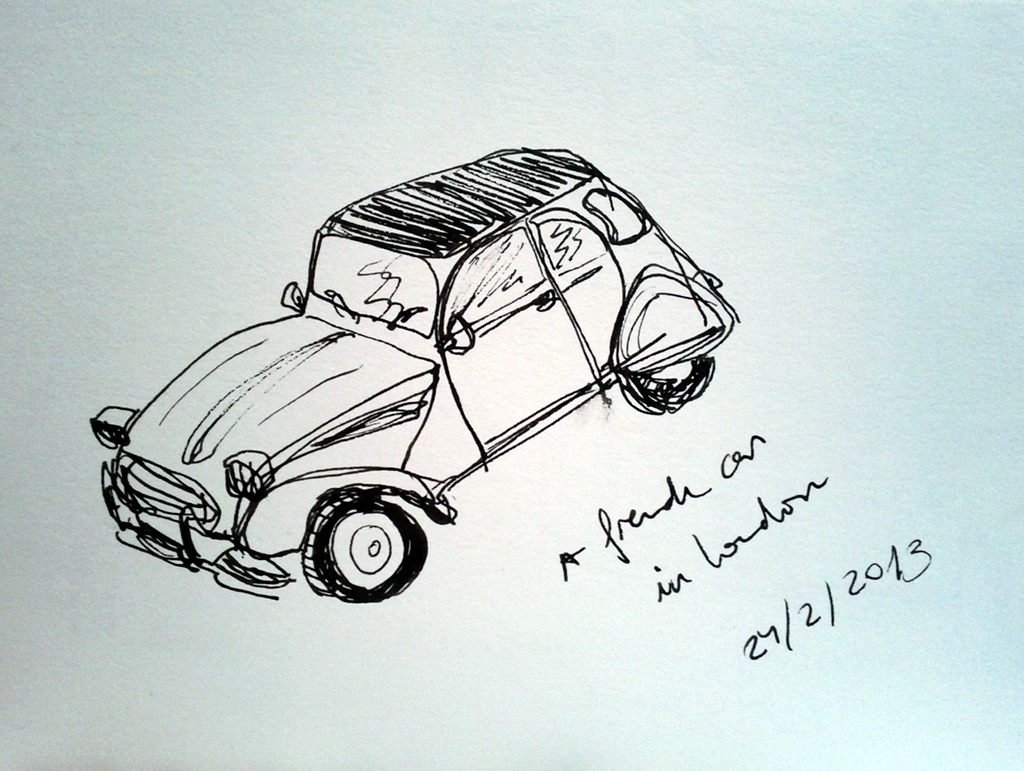 I was happily minding my own business when I saw this car parked on the street... and totally had to draw it!

I hadn't seen one of these for years, and I always have found them really funny and hilarious to look at. This one was really well cared of, with lots of shiny metal parts and polished surfaces, really unlike the battered "two horses" (as we called them in Spain) that used to be the first car for many a generation, a bunch of years ago.

Ironically I think I've only been once in one of these cars: I was eight years old, we were on the school run and it was pouring with April rain. And "pouring" is probably too benevolent to describe what was happening. It was raining cats, dogs and the whole of Noah's Ark was falling over ourselves. So here we were: my sister, my cousin and me, trying to get to our school just armed with three umbrellas and a lot of faith (as we had to cross over a windy bridge) when suddenly a 2CV stopped nearby. We turned our heads towards it and found a smiling mum with curly hair and a smiling kid gesturing us to enter the car, which we did. Our cousin stayed on the ground, so to speak, as she was our part-time nanny, waved us goodbye, and we were transported to school thanks to our anonymous benefactor.

It was quite a raw experience. There was hardly any padding on the inside, and there were many metal parts exposed, which was quite a contrast compared to the "family car" we were used to (a Citroen GS). The car bounced and shrieked violently even with the smallest of the bumps, with the little padding foam inside the seats getting quickly compressed into nothing and letting the internal springs reveal themselves to the world, and each time we stepped over a puddle I feared it would get inside the "cabin" and get our feet wet, but thankfully that never happened.

Our driver hardly spoke, but kept donning a quiet smile of satisfaction. His son didn't speak much either; he was a little older than my sister and younger than me, so we hadn't spoken to each other before, and were in that stage in life in which shyness reigns supreme, so we kept it that way. Of course we said thanks when we left, and kept waving a shy "hi" whenever we encountered her again at the school gates. We didn't see them for long, as they disappeared from the school when the year was over. Maybe they moved to another town, but I will always be grateful for what she did.