The day finally came and not only was I a little bit nervous--I was also FREEZING as it had been snowing the day before and below zero during the night. Things hadn't changed much in the wee hours of the morning, so in the time that it took me to go from the bus stop to crossing the Millenium Bridge and finally reaching the Tate my hands got completely numb. This was going to be a (frozen) hell of a sketchcrawl, specially compared to the last one I attended in hot Barcelona in July, so I decided to grab some coffee while the meeting hour approached.

A little bit after, I came back to the meeting point, the top of the Turbine Hall ramp. Being so close to the door made it a gelid place to wait! Suddenly there were a good bunch of people there--most were with CASS ARTS bags and other painting supplies on hand so they were unmistakable! We started chatting and introducing ourselves; most of the people seemed to have been there just once or simply never, so we were all a bit shy!

After a while the organiser explained his proposal: the brave souls could dare go outside, then the less brave could stay inside. We would meet at three for lunch (optionally) and at five for sharing the results of the day. After that, as it's tradition in any proper English meeting, we all would head to the pub.

Crazy of me, I joined the brave souls team. I was only able to produce this drawing of the Tate Modern in this sort of spherical perspective... 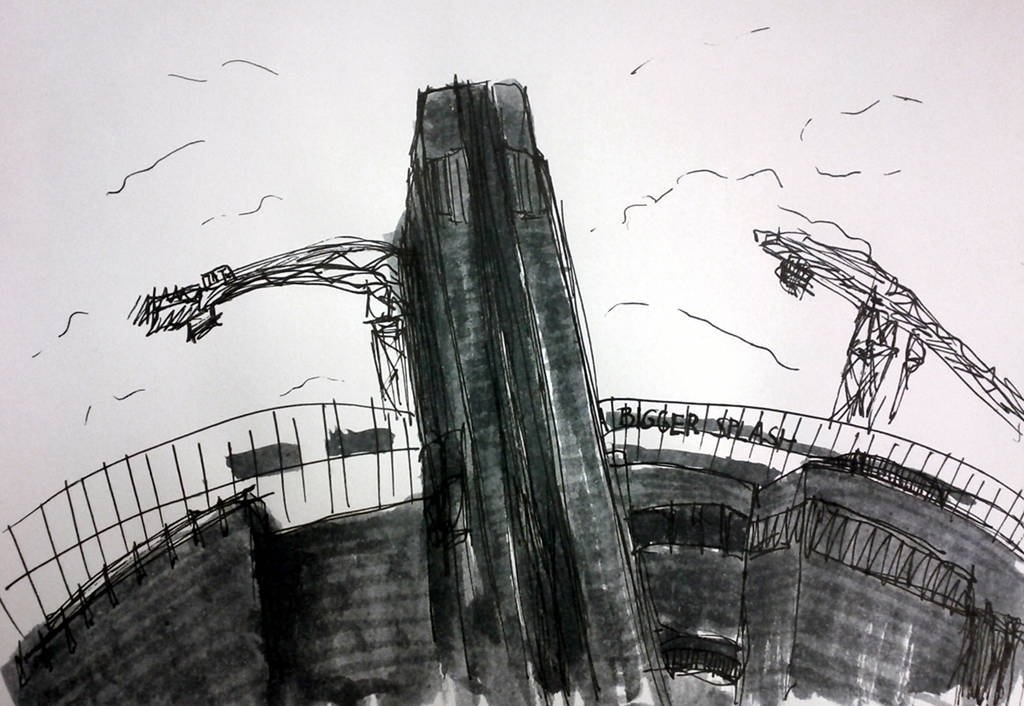 ... but that was only because my hands were beginning to tremble so I was unable to get proper straight lines so I just went with the flow (or lack of it--in my fingers!)

I had to let it dry (pretty hard as it was beginning to snow again), so I walked around to see what the fellow sketchers were doing. They were closing their sketchbooks and heading somewhere warm. We agreed on going to a pub nearby as it had nice river and St. Paul's views. There, we grabbed something to warm our stomachs and our souls: mulled wine!

Then began drawing each other: 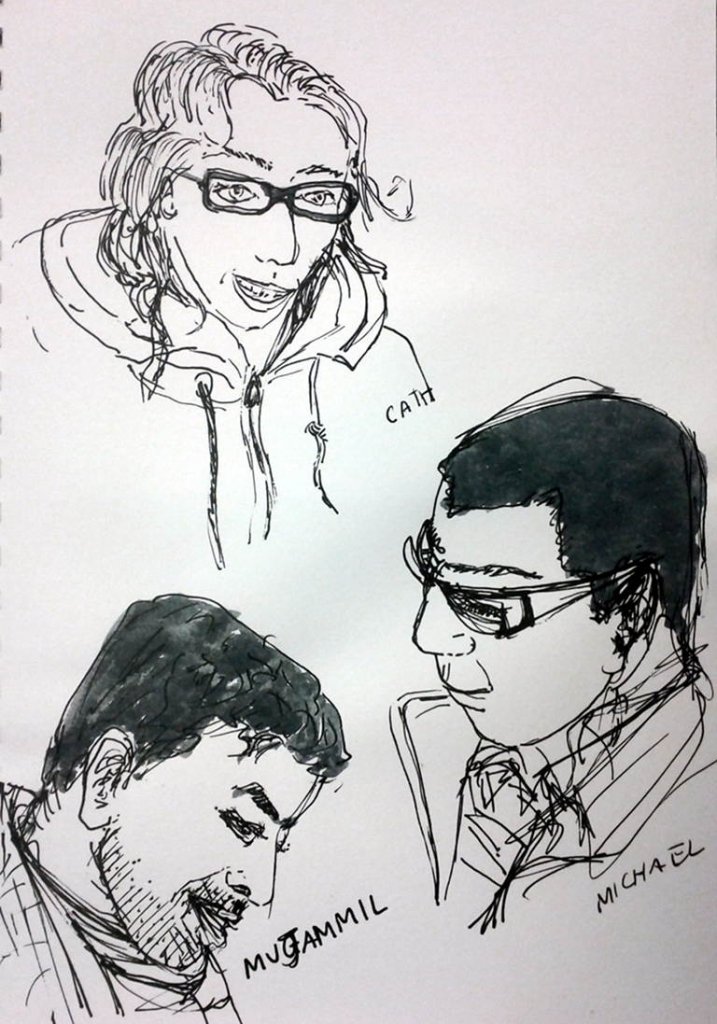 Although I made them promise to me that they wouldn't get mad if my drawing didn't make them look specially appealing. Cath told a funny story with regards to that: when someone made such unflattering drawings of people, those depictions would just DESTROY THEM. It sounded just too funny to let it be forgotten. Being destroyed by an innocent drawing!

There was a point in which the three of them were looking at me for their sketch. That was a little bit unnerving, although certainly not enough to DESTROY ME. As they asked me to stay quiet, I decided to draw a view of the pub's many and varied lamps: 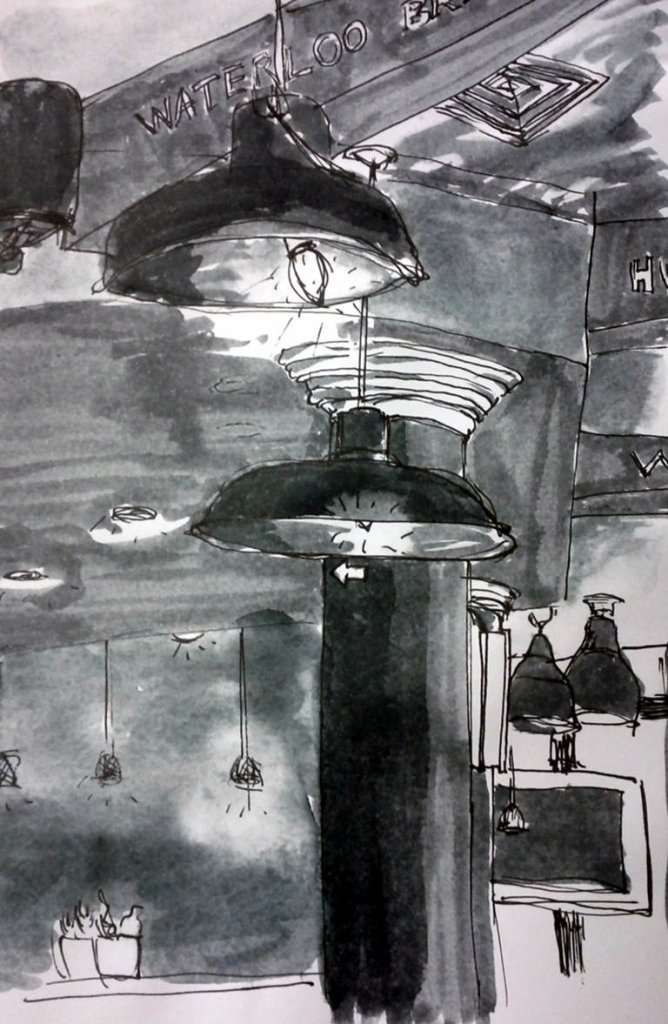 After we were done with those, we headed back to the Tate. After that, it was the main point: to draw there! They went to the shop to check something, but I had the drawing mode ON, and couldn't stop then, so I left and moved to the brand new Gas Tanks, a recently completed restoration project which adds some new exhibition space to the Tate Gallery. These had been on the works for at least a couple or three years, so I was really intrigued about the final result.

They don't disappoint, although being what they are --the old power station gas tanks-- I understand they can certainly feel really claustrophobic for some people. For me they were fine as there is lots of room in them, and something else: they were distinctively warmer than the Turbine Hall. Total win.

I walked around for a while, admiring the industrial architecture and the complex, honest geometry in play, until something caught my eye: 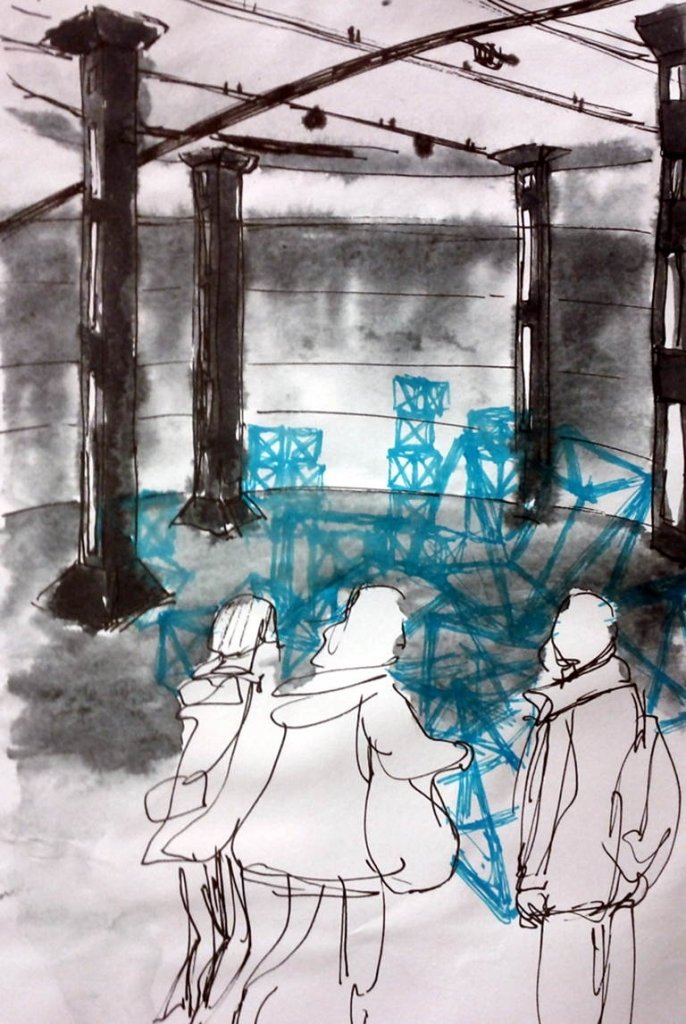 It was a funny sculpture/installation by Rasheed Araeen. Initially he would assemble the cube lattices in a neat ordered and regular grid, and then ask visitors to the exhibition to rearrange them as they saw fit. Simple as that. However, the room, the lighting and the colourful wireframe cubes made for such a vibrant contrast that I had to draw them.

I first did the linework, then painted the shadow thing with a waterbrush along with the watered down Sailor pen ink that wasn't really waterproof (but that's another story). Then I had to wait for the wash to dry before I added the blue cubes with an absolutely-non-waterproof Faber Castell pen... so I took this picture: 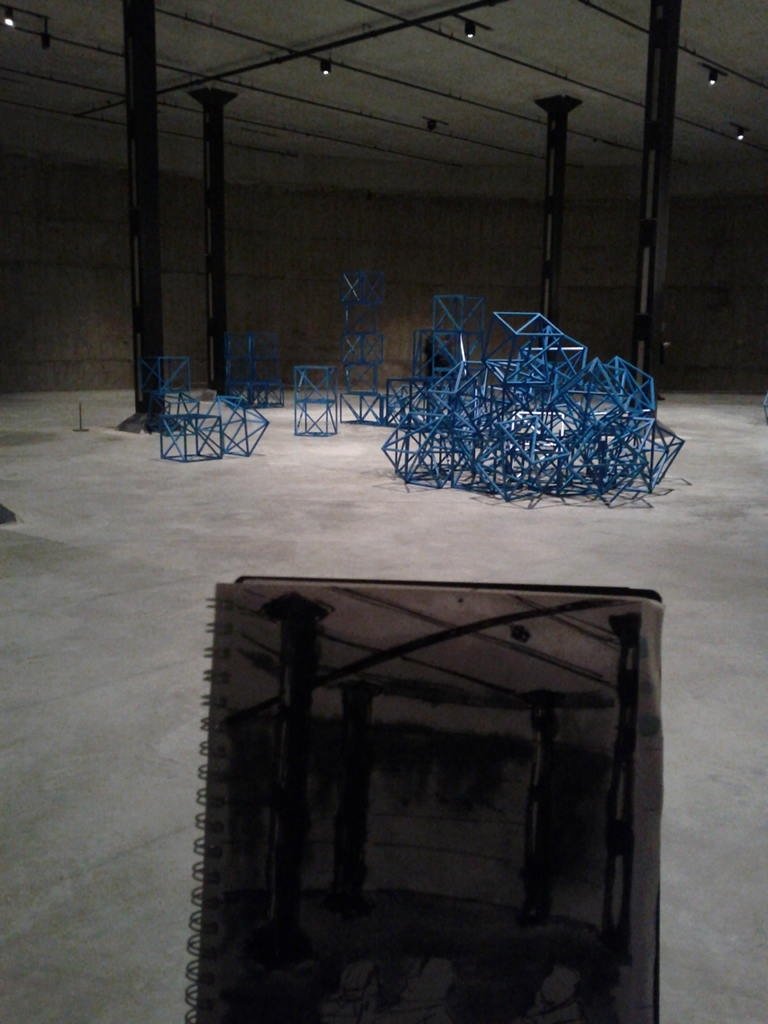 I guess you'll be able to appreciate the sheer tension of the lighting.

After this was done I went to the Espresso bar in the third floor to grab something to eat. It was well past three so I had abandoned any hope of having lunch with any other sketcher! Besides when you get into the drawing mood you just want to draw, not talk!

It was quite strange to be back to the room where the Exquisite Forest is, specially after having been there on the day of the opening. Today people were just sitting in front of the computers, hardly drawing on them as most of them were with an "Aw! Snap!" message, and pretty much only kids dared trying to draw but got frustrated with the tactile response and the interface generally so they left. A bit sad really. I decided to draw something more while I finished my coffee (gotta stay warm AND alert): 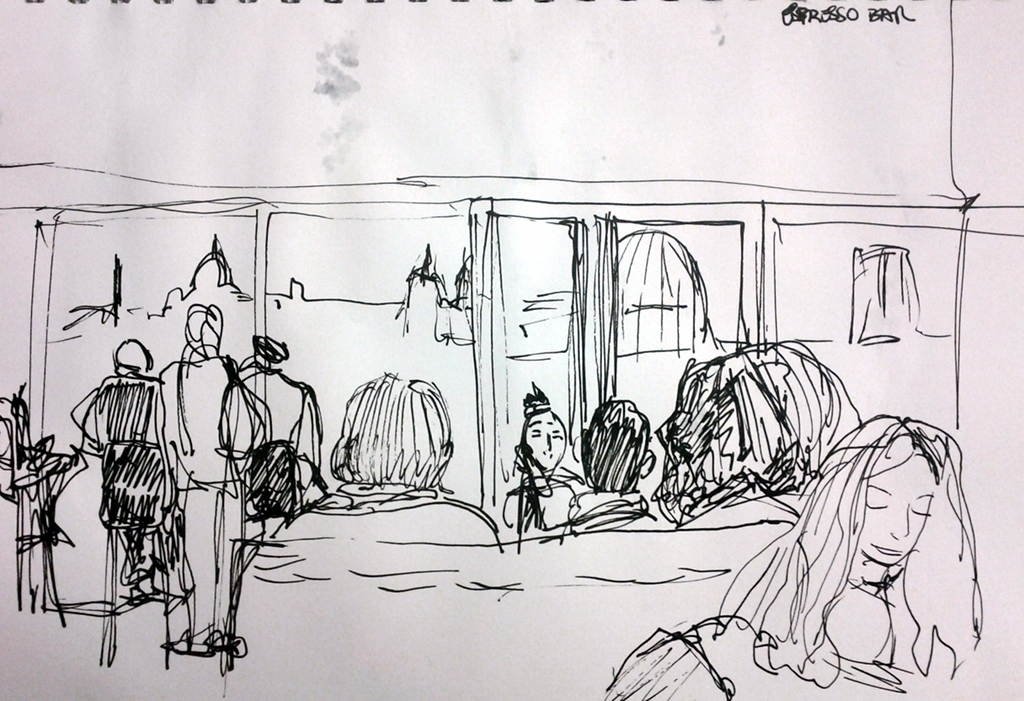 I think the girl on the right noticed she had been drawn, but they didn't say anything and acted naturally which was cool. In payment I told them they were forgetting a hat when they left! Ha!

There was still time to draw something else before five. I went down using the stairs and stopped in a couple of levels to find some interesting view but the closer to the Turbine Hall I got, the cooler it was. There was absolutely no way I would stay there drawing, so I did the easiest thing: back to the tanks!

I focused on the corridor space this time: 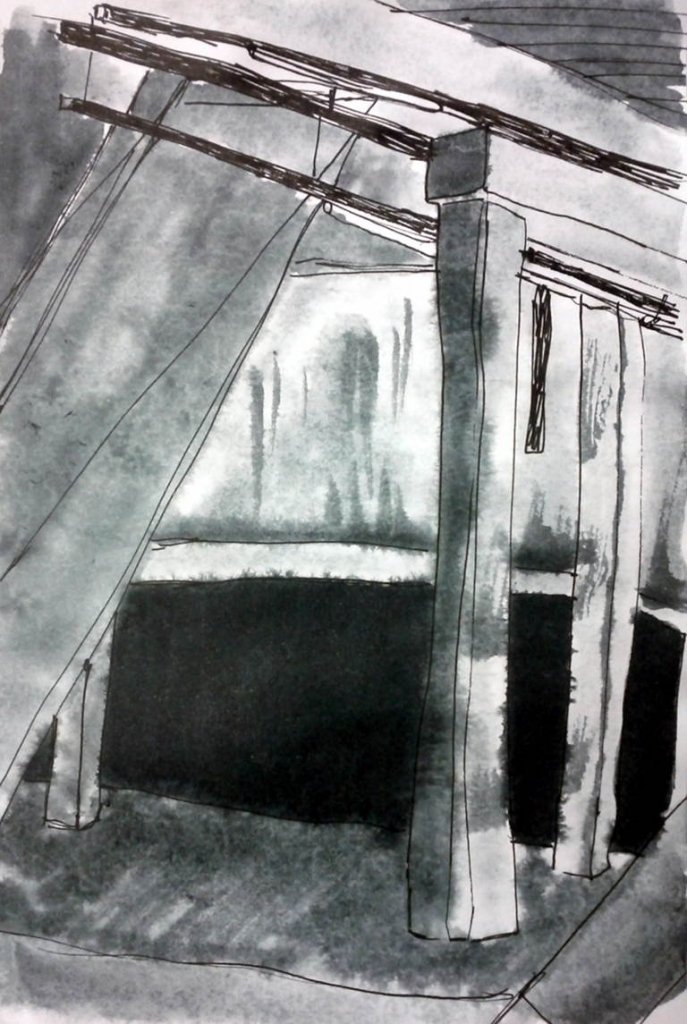 It somehow feels like you're inside a big monster and the huge beams are part of its thorax. At the end of the corridor I could hear the same strange music on loop that I had been hearing before while drawing the cubes room, so I entered that room to find out what was it all about, while my last drawing dried.

Six projectors were projecting simultaneous bits of a film inspired in Communist propaganda. The music was made to sound akin to the aesthetics-hence the unusual chords. It was a somehow mesmerising show, as if there was some sense hidden behind the general nonsense and one could find it by staring at the screens for a while. I am not sure I managed to do it though, but I did enjoy some of the animation clips.

Up again in the Turbine Hall it was time for showing our works! I opened my sketchbook by the Rasheed page, as that was the drawing I liked more (maybe because of the blue-gray contrast). It is interesting that most of the drawings had much gray in them. Weather certainly influences us! 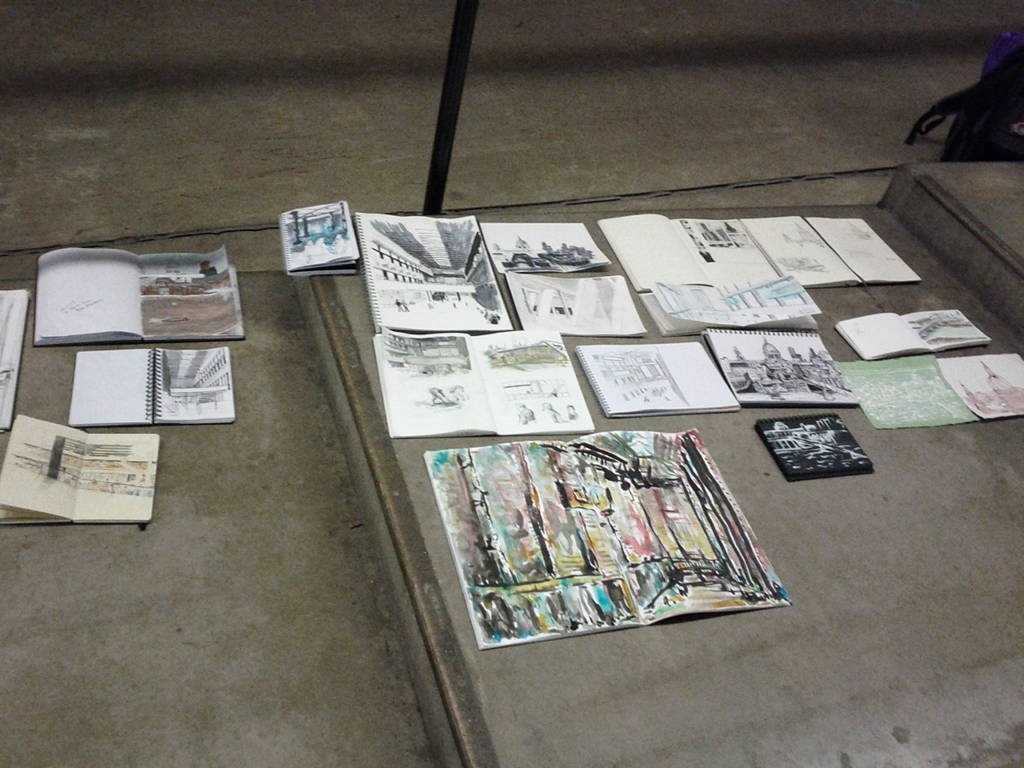 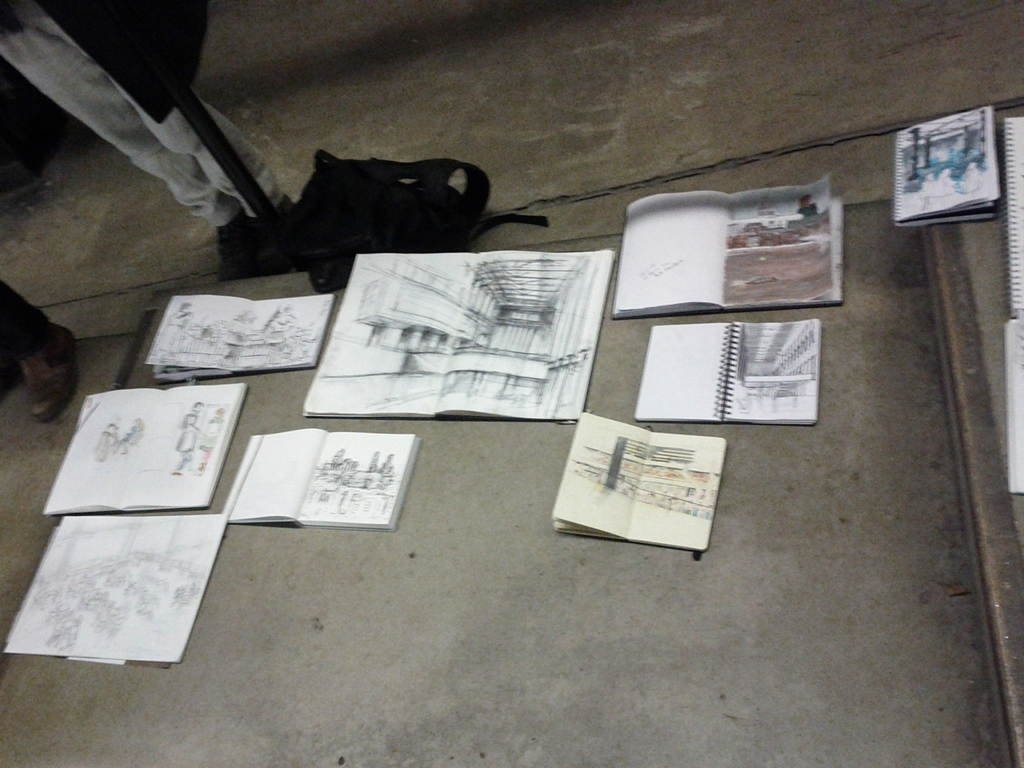 After that some of us headed for the pub... again! It was nice and warm in there, and we managed to take hold of a big communal table that we used to look at our sketchbooks and draw a bit more. Although I didn't as I was already exhausted at that point... maybe I was being taking hostage by the big cold that would surprise me this morning at 5 AM with a totally blocked nose and throat pain! But before that happened, I had to go back home.

I walked to the bus stop only to find there wasn't any bus there, and taking into account it was a) Saturday and b) near or under zero degrees, I wouldn't be standing and waiting for the bus. So I decided to walk home. If a bus passed, fine, and if not I would at least not freeze!

Then I remembered that I had downloaded the latest episode from Make it, then tell everybody in my phone and had also remembered to bring earphones so I put them on and enjoyed the walk all along Fleet Street while listening to Dan Berry and Charlie Adlard in the podcast. A nice way to finish the day! And of course, more than one and two and three buses passed, but once you start walking you can't stop! :-)

This morning I was sort of regretting it, though! Haha! I guess I'll recover quickly. I hope...

Here's a couple of posts from other attendants:
Bankside sketchcrawl: in the warm by James Hobbs, and
Images from the sketchcrawl by Urban Sketchers London (whoever it is that controls the account!)